A few days ago, I visited the Zapatista area in in Chiapas, Mexico. The Zapatistas (or EZLN) are anarchists, who revolted against the Mexican state in 1994. They were successful in their revolution, and today control a large region in Mexico.

For some more background, here are two great documentaries about them:

We visited Oventic, which is one of their main towns, as far as I understand. It is a one hour car ride from San Cristobal, the closest city.

When we arrived in Oventic, I was surprised to see one masked guard behind a gate. And contrary to what I read, he also wasn't armed. Unfortunately we were not allowed to take pictures of the people, even if they were masked. And our guide apparently wasn't allowed to talk to us, and we couldn't ask questions. That means I don't know anything except what I read on the internet, and what I saw in the town myself.

What follows are mainly pictures of the buildings, many of which contain really cool art. 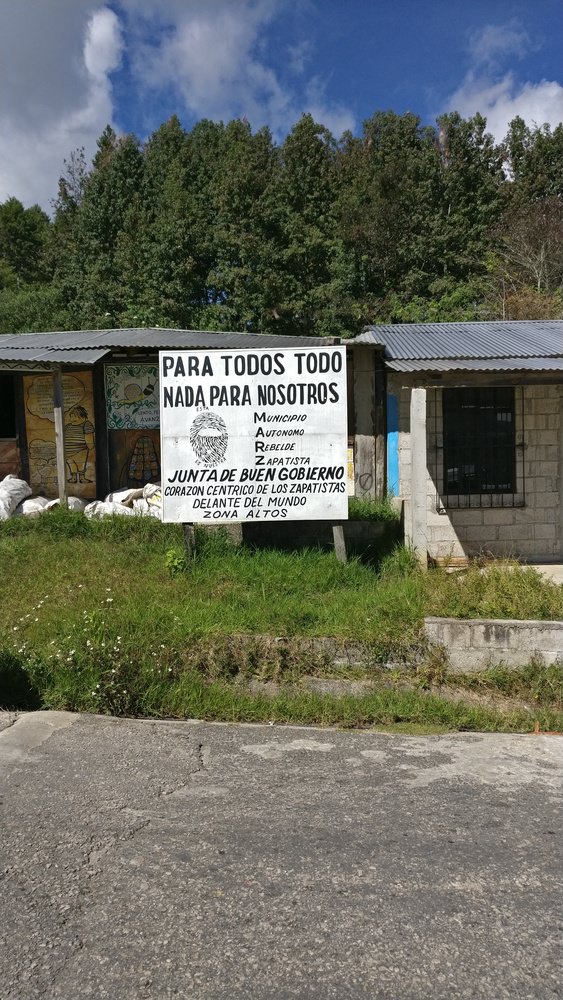 These two signs were at the entrance of their village. The first one says “For everyone everything, for us nothing”. This seems to be their motto, meaning that they give everything to defend their people. The second sign says: “By agreement of the local and municipal authorities, it is forbidden to transfer illegal vehicles, growing drugs and assaults”. On the small sign below: “You are in the territory of the rebelling Zapatistas. Here the people order and the government obeys.” This is the hospital building. It has paintings of Che Guevara, some masked Zapatistas, and indigenous motives. It also shows Emiliano Zapata, who revolted against the Mexican government in 1910. He also gave the Zapatistas their name. They also have some ambulances. This is an old one which was dedicated to one of their commanders. There was also a newer ambulance next to it. “Office of the autonomous counsel of San Andres Sakamchen of the poor.” “Office of women for dignity”. Feminism is an essential part of the Zapatista philosophy. You might notice that many of the paintings show female, masked Zapatistas. We also saw at least one female guard at the entrance of the town. “Collective shop of the women of the resistance”. The town had multiple small coop shops. Another painting of Emiliano Zapata. A new painting being created. Like most people in the town, these were not masked. Only the guards at the entrance actually hid their face. On the left is a painting in support of the Kurds, presumably refering to Rojava. This one looks pretty funny, the text says “we are roots”. The small town has some surprisingly large school buildings. The Zapatistas also teach Spanish to foreigners. We saw some european-looking people in one of the classrooms. Translation of the text: “in the autonomous Zapatista schools children are taught the collective spirit and conception of the world. Our philosophy is the human being as a part of nature. Support of the protest against an oil pipeline at Standing Rock. Waste seperation is not a thing in Mexico. Even better that Zapatistas are actually practicing it.

If you want to see more, I uploaded some extra pictures on my Nextcloud instance. This also includes full resolution versions of the pictures here.